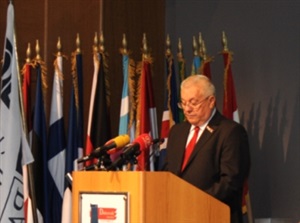 I believe that Dubrovnik is the right place to discuss all issues of vital importance for Southeast Europe and for all countries and peoples who live here. Because of its history Dubrovnik offers an ideal environment for dialogue on current developments in the region.

Dubrovnik has always been at the crossroads of civilizations. Christian, Islamic and Jewish culture came together in the city and its surrounding area, and it is a well known fact that the town accommodates the second oldest synagogue in Europe.

I believe that these meetings have been organised in a historic moment for Southeast Europe. Croatia has completed the accession negotiations and is preparing to sign the Treaty of Accession to the European Union. The path to this goal has been long and painstaking, but we have finally managed to confirm that we have achieved, thanks to our own efforts, what seemed unattainable only a few years ago.

Croatia sees membership in European and Euro-Atlantic integrations as a unique historic opportunity to further develop democracy, stability and security. We believe that this is also an opportunity for other countries in Southeast Europe.

In this context, the concluded negotiations are the best incentive for other countries and an indication that reforms are worth the effort. As we see these days, everything that we have done in our society's transition is eventually rewarded.

The Republic of Croatia has a special interest in attaining long-term stabilization and democratization in the region of Southeast Europe, in ensuring lasting peace and development in this part of Europe, in establishing good neighbourly relations based on equality and reciprocity, and in permanently resolving outstanding issues in the region.

In doing so, we do not want to halt our efforts; we want them to continue after Croatia accedes to the European Union. 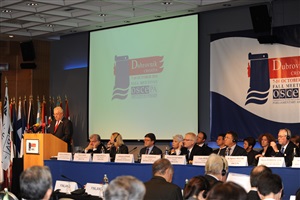 The Organisation for Security and Co-operation in Europe has made a decisive contribution to setting up the political and legal framework to stabilise the region. Its work on establishing societies where human rights, the rule of law and freedom of the media in Southeast Europe are respected is immeasurable, and I wish to use this opportunity to praise the Organisation for its contribution.

OSCE missions and offices have significantly contributed to alleviating the war crimes legacy in Southeast Europe and to the return of displaced persons and refugees which burdened, and still continue to burden, the relations among countries. Plenty of work remains to be done in issues such as development of good governance, the fight against corruption and human trafficking.

The economy is certainly one of the ways to build normal relations in this part of the world. Creating a healthy business environment, investment opportunities, removal of trade barriers, co-operation in energy and environmental protection, and joint development of infrastructure are the best ways to build a future.

As we are in Dubrovnik, one of the important points in the Mediterranean, we must look at its eastern coasts and the developments in the Arab world that stand in the focus of public attention across the globe. OSCE Participating States should by no means ignore these developments.

Parliamentary diplomacy has indeed proved to be an important engine of developing co-operation among countries, and its role and importance are increasingly recognized and acknowledged in the modern world. With parliamentary and classic diplomacy and regional and transboundary co-operation, Croatia wishes to exert a positive impact on the political and economic situation in the countries in the region and strives to provide all necessary assistance in this context.

We have shown and demonstrated our willingness to assist our neighbours by making the Croatian translation of EU law available to all interested countries. We wish to continue applying such a constructive approach in the future. This proves Croatia's openness to all countries which have the same aspirations and wish to share the same values.

I must say here quite openly that any blocking of European and Euro-Atlantic integration processes in the region does not send a positive signal to other countries in Southeast Europe. However, at no time do we lose sight of the achieved degree of reform implementation in other countries, and we do our best to provide all necessary assistance to them on the same path.

Finally, I wish to reiterate that Croatia aspires to develop its relations with neighbouring countries on the principles of good neighbourly co-operation, mutual respect and sovereignty, equality and resolution of outstanding issues by political means.

Against this background, I call upon all countries of Southeast Europe to continue with the reforms so as to ensure a well-deserved future both for themselves and for their citizens. It is time for this remaining part of the European continent to be integrated into the European community of states and nations, and for this process to be finally completed.

I expect that these meetings will be an additional contribution to rounding up the zone of stability, security and prosperity in this part of the world – the broad topics of these meetings are a guarantee for success.

I wish you a fruitful meeting!