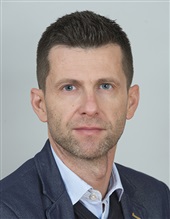 Born on 16 May 1972 in Varaždin. He acquired a postgraduate specialist degree in tourism and hotel management from Libertas Business school in Zagreb.