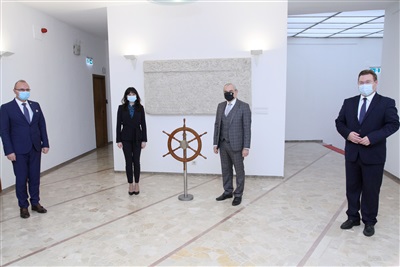 Zagreb - In the framework of the Croatian Presidency of the EU Strategy for the Danube Region (EUSDR), Croatian Parliament hosted the Seventh Conference of the Danube Parliamentarians on Wednesday, entitled "Smart Solutions for Sustainable Development". This event also marked the end of Croatia's Presidency of the Strategy, which is being taken over by Slovakia. The "helm of the Presidency" was handed over to the Slovak Ambassador to Croatia, Peter Susko, by the Minister of Regional Development and EU Funds, Nataša Tramišak, in the Croatian Parliament.

Opening the video conference, the Chairman of the Parliamentary Committee of Regional Development and European Union Funds Marko Pavić communicated the message of the Speaker of the Croatian Parliament Gordan Jandroković to the Conference participants, emphasizing that the Croatian Parliament remains committed to exchanging experiences and activities aimed at strengthening and developing the EU Strategy for the Danube Region. He commented on the work of the Conference of the Danube Parliamentarians and said that it had fulfilled its task since its first holding in 2014.

According to Pavić, the Conference's work program is aimed at encouraging innovative technologies to improve the sustainable development of the Danube Region, discussing the possibilities of increasing the number of high-tech companies and the competitiveness of small and medium enterprises in the region, considering ways to improve knowledge transfer between universities, the economy and local communities, as well as the creation of high value-added jobs to prevent the emigration of young people and encourage long-term regional development.

In the introductory part of the Conference, the participants were addressed by the Minister of Regional Development and European Union Funds Nataša Tramišak and the Minister of Foreign and European Affairs Gordan Grlić Radman. Tramišak commented on everything that has been done in the last ten years in the implementation of the projects of the EU Strategy for the Danube Region and the Action Plan. She emphasized that a number of activities had been done, everything set out in the Strategy had been achieved, the Action Plan had been revised and a new set of priorities for development, sustainable development and environmental protection had been established throughout the Danube Region. Regarding the harmonious development of the Danube Region, she pointed out the importance of providing smart solutions and stressed that 14 participating countries should further address the implementation of the Strategy ideas both in practice and real life. Minister Grlić Radman pointed out that the Danube was an integration factor of the region because it connected over 100 million people. At the governmental level of the Danube Region participating countries, he said, it had been considered how to activate the full potential of the region and equalize and strengthen its sustainable development. Therefore, full support was given to joint projects aimed at sustainable development, digitalization and innovation, but also those focusing on human health.

The plenary part of the Conference, moderated by the Chairman of the European Affairs Committee Domagoj Hajduković, was addressed by Zdravko Kačič, Rector of the University of Maribor, Tomislav Bolanča, Dean of the Faculty of Chemical Engineering and Technology of the University of Zagreb and Mateo Ivanac, Head of Department of Innovation System, Croatian Chamber of Economy, who presented several practical examples of knowledge transfer between the university, the economy and the local community.

Rector of the University of Maribor Kačič pointed out that in these times when COVID had changed our lives in many aspects, it was important to properly evaluate knowledge because it was the basis of development. “The University of Maribor has been active in one of the pillars of the Danube Strategy called "Building Prosperity in the Danube Region", said Kačić. He emphasized the importance of cooperation between the universities of the Danube Region and joint work on the development of information and communication technologies, as well as cooperation with stakeholders in the economic sector. He said that current obstacles to the implementation of these goals were the lack of awareness of the importance of the Danube Strategy, not only among the general population, but also at the level of governments and administrations, as well as unfavourable legal frameworks in most Danube countries.

Dean of the Faculty of Chemical Engineering and Technology of the University of Zagreb Tomislav Bolanča also spoke about connecting academic institutions and the economic sector in the context of providing "smart" solutions for sustainable development taking his Faculty as an example. Mateo Ivanac, Head of Department of Innovation System, Croatian Chamber of Economy presented the research work of the Croatian Chamber of Economy in the field of the development of innovation strategies for the Danube Region.
Participants in the discussion were: István Jakab (Hungary), Tobias Gotthardt (Germany), Josha Frey (Germany) Nikolaus Berlakovich (Austria), Carmen Jeitler-Cincelli (Austria), Elisabeth Götze (Austria), Guido Wolf (Germany), Marina Pendeš (Bosnia and Herzegovina), Christoph Matznetter (Austria) and Dragan Krapović (Montenegro).

In the final part of the Conference, the host Marko Pavić presented the Joint Statement, welcoming the next Conference hosted by the Slovak National Council.