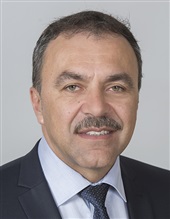 Born on 16 November 1968 in Čapljina (Bosnia and Herzegovina). Graduated Nautical Studies at Dubrovnik University, Zagreb Faculty of Kinesiology and Naval Academy in Split.

Deputy Club of the Croatian Peasant Party and Democrats