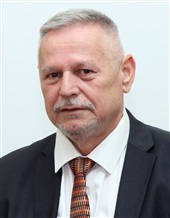 Born on 26 June 1956 in Sisak. Graduated from the Faculty of Humanities and Social Sciences, University of Zagreb – Master of Arts in Sociology and Philosophy.