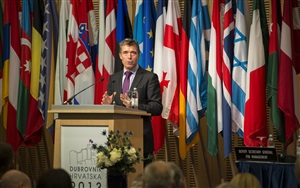 Let me start by thanking the Croatian Government and Parliament, as well as the President of the NATO Parliamentary Assembly, for inviting me to be with you today. As a former parliamentarian, I always look forward to coming to your meetings.

And today’s meeting also gives me the opportunity to congratulate Croatia on joining the European Union this summer. This is an important step in the steady integration of South-East Europe within the Euro-Atlantic area.

The Belgrade-Pristina agreement on normalisation represents another significant step. Implementation of that agreement must continue. And NATO, KFOR, have a key role in that implementation.

Alongside the European Union, NATO will play its part in making sure the future is a better one - for all the countries of South-East Europe. We will continue to assure peace and stability. To engage all interested countries in partnership and cooperation. And to keep our door open for new members.

Over the past decade, Croatia has already walked through NATO’s open door, and so have Albania and Slovenia.

Bosnia and Herzegovina, Montenegro, and the former Yugoslav Republic of Macedonia all know that NATO’s door is open for them as well. If they demonstrate a new resolve to settle old differences. A track record of reform and responsibility. And political commitment to building security and stability together with their neighbours and with other nations.
Given their recent history, the people of this region understand the value of defence and security. They understand why defence matters.

The international security environment has changed dramatically. Most of our operations and missions take place a long way from home. Very few of our nations still have conscription. And this has led to a certain gap between the public and the defence institutions such as the military.

At the same time, the financial crisis has placed great strains upon our economies. It has led to defence cuts in many of our countries. And it has raised questions about the need for defence.

Over the past six months, NATO has been working with prominent research institutes from eight Alliance member countries to look into this question. These institutes discussed defence with representatives of civil society. They also drew upon the results of public opinion polls. And some also conducted interviews with policymakers and parliamentarians. So perhaps some of you were approached as well.

The goal was to get a broad picture of how our publics look at defence, and the value they place upon it. The big question was: how much does our defence really matter?
The results are now in. And the answer is clear. In a nutshell, defence does still matter. But we all need to do a much better job at explaining why.

Four findings stand out from the research.

First, there is a wide-spread respect for our military forces and broad support for defence investment. The level of support varies from country to country. Quite a few people believe that we can, and should, cut further. But many more believe that we should either maintain our current level of spending, or increase it. Interestingly, the same results also came out of this year’s Transatlantic Trends survey.

Second, our publics do understand that a country’s freedom and prosperity depend on its security. But they don’t understand how much we invest, how our investment is used, and what roles our military forces actually perform.

For example, many people believe that our countries spend far more on defence than we actually do. In one country, public estimates of defence investment as a percentage of GDP ranged between 2 and 15 per cent. I think such views may help to explain why some people believe that more fat can still be cut from defence. The reality, of course, is very different. The fat has already been cut. And we are now very close to the bone.

Now third outstanding result from this research is that defence industries are generally viewed as positive contributors to our economies. But these views are coloured by perceptions of wasteful spending, a lack of transparency, and inefficiencies in procurement.
And fourth, our survey showed a growing divide between North American and European perceptions of NATO. Generally, Europeans tend to value their country’s membership in the Alliance. In particular, being an Ally is seen as improving the transparency and effectiveness of one’s national defence forces.

But North Americans increasingly believe that NATO doesn’t offer much for their security, and that Europeans need to share more of the transatlantic security burden.

So in light of these findings, how can we make a better case for our defence in general, and for NATO in particular – on both sides of the Atlantic? I see three priorities:
First, we must highlight the basic purpose of our defence: to protect our peoples and our principles. Freedom. Democracy. Human rights. And the rule of law.

Everyone in the Alliance shares these fundamental values. They are vital to our continued peace and prosperity. But they are not a given. We must all be prepared to stand up for these values. And – if necessary – we must be prepared to fight to protect them.

It was our determination to defend those values that ultimately ended the Cold War. Former adversaries became Allies. Europe is now at peace. And people feel secure, as war among European nations is simply unimaginable.

Two decades ago, we intervened to protect our values right here in South-East Europe.
And two years ago, we acted to protect civilians in Libya and enforce a historic resolution of the United Nations.

Every single time, we defended our values.

It’s not easy for the public to see what we might lose if we don’t invest in defence. So we need to do more to quantify this. And there are data available to help us make the argument.

Earlier this year, the World Bank estimated that the annual global impact of Somali piracy is a staggering 18 billion US dollars.

The US Center for Naval Analyses has estimated that, if the Strait of Hormuz were closed completely, oil prices could treble.

Europol, the European Union’s law-enforcement agency, puts the annual value of corporations’ losses from criminal cyber activity at one trillion US dollars.

And you may remember that in April this year, a bogus tweet from the Associated Press’s Twitter account, claiming that two explosions had shaken the White House, led to an immediate loss of over 136 billion US dollars in traded stock.

However, this financial cost is nothing compared to the human cost.
In June, the United Nations High Commissioner for Refugees reported that there are now over 45 million forcibly displaced people. Nearly half of all refugees are children. They have become refugees because of conflict, crisis and catastrophe.

In today’s unpredictable world, defence is an essential insurance policy. We have to spend money to save money. And to save lives.

Investment in defence is also an investment in one of the world’s most innovative, highly-skilled and highly-productive industries. For example, in 2012, Europe’s defence industry had a turnover of 96 billion Euros. And it employed nearly one and half million people directly and indirectly.

The expertise of our defence industries has been built up over generations. And it has led to many products that have helped to transform our daily lives for the better -- the jet engine, satellite navigation, and the internet - just to mention some examples.
Like any other high-tech industry, the sector is constantly evolving. If we cut defence spending too much, for too long, we will sacrifice that expertise, and it will be impossible to replace in a hurry when we need it.

Now, don’t get me wrong. I would never argue that we should invest in defence just to create jobs. Of course not. My point is: we need defence to protect our populations, and our principles, our values and our societies. And once we have a defence sector, we need to understand that it is not only a cost. There are also significant benefits, including innovation and technological progress.

The third priority, if we are to make this case more convinsingly, is to emphasise the wider importance of defence as a tool for international influence and cooperation.
For all our nations, diplomacy has been and will remain the primary tool for dealing with international security challenges. But by investing in defence, we are able to back our words up with military strength. And to increase our credibility.

Personally I believe that recent developments in the Syria crisis hold an important lesson in this regard. I do believe without the credible threat of military force, Syria would not have agreed to the destruction of its stock of chemical weapons.

They get friends to help them in time of need. They get access to more military capabilities. They get a network of security partnerships with countries all over the globe. And they get to play a much larger international role.

Whether in Kosovo, Libya or Afghanistan, capable military forces led by NATO have allowed us to put an end to violence and bloodshed. To stand up for our values and interests. To strengthen the stability of these countries. And so to strengthen the security of our own nations.
No individual nation would have been able to carry out any of these operations with the same success. Working together in NATO offers political credibility. It offers legitimacy. And it offers unrivalled military effectiveness. And this is why so many countries from around the globe have been keen to partner our Alliance, including by participating in our operations and missions.

Just last month, during the United Nations General Assembly, I met with Secretary General Ban Ki-moon. And one of the issues we discussed was how NATO could do more to support the United Nations, especially on humanitarian operations.

Ladies and Gentlemen,
Defence matters. I know that. You know that. Your job is to help our publics know that too.
As national parliamentarians, you have a special responsibility. You have to take the difficult decisions about defence budgets, and about whether or not to send your armed forces into harm’s way on operations. But you also have the responsibility to explain to your taxpayers why defence matters. You must frame the arguments and lead the debates. You must explain not just the true costs of defence, but also the real benefits of defence.

Security is precious. And freedom is priceless. But neither comes for free. We have to be able, and willing, to defend both.

Thank you very much.