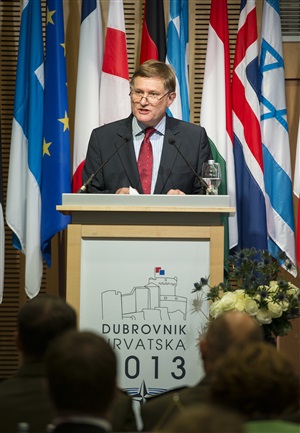 After the dreadful conflicts which rocked this region in the 1990s, leaders in Europe and North America helped the people of the Western Balkans to restore peace and to reunite with the rest of Europe. Croatia was offered a path towards lasting reconciliation and integration within a union of common values and shared prosperity.  On 1 July, Croatia successfully reached the end of that path. On behalf of all of the Assembly, I congratulate you and the Croatian people on your achievement.

Croatia has joined its neighbour Slovenia as a full member of the European Union. Other countries in the region – Albania, Bosnia and Herzegovina, Montenegro, the former Yugoslav Republic of Macedonia, Serbia and Kosovo – are also well on their way down that same path. But our shared vision, our hope and aspiration for a Europe whole, free and at peace, will not be complete until all of them re-join the European and – for those who so aspire – the Euro-Atlantic family. I know they can count on Croatia as a staunch advocate of NATO’s open door and EU enlargement.

You may rest assured that the NATO PA will also continue to support both NATO and EU enlargement, as it has done consistently for the past 15 years.

This region has witnessed remarkable developments this year. Croatia’s accession, of course; and the landmark agreement between Belgrade and Pristina on the normalisation of their relations is another extraordinary breakthrough. I would like to take this opportunity to pay tribute to our Serbian and Kosovo colleagues for their courage, and their governments’ leadership in making this breakthrough possible.

Yet, as we celebrate these major, positive developments, violence continues to rage on the Eastern shores of the Mediterranean.

For the past two years, Syria has suffered a bloody civil war which has left more than 100,000 of its people dead and 6 million displaced. Two weeks ago, I visited the Zaatari refugee camp in Jordan and spoke to humanitarian aid workers.  It was a deeply humbling experience, a reminder of the hardships the Syrian people have endured since the beginning of this crisis and which they continue to endure. Last month, the World Food Programme told us they needed to get emergency food supplies through to 3 million hungry people in Syria itself, but were able to reach only one and a quarter million. The camp reminded us also of the admirable role that Jordan, Turkey and Lebanon are playing to address this humanitarian tragedy. I want to pay tribute here today to our Turkish and Jordanian members. Not only have your countries provided shelter for the victims of this conflict, but they also remain immensely important anchors of stability in this troubled region.

On 21 August, the Syrian regime’s ruthless violence reached new heights, when chemical weapons were used against innocent civilians, killing 1,000 men, women, children and infants in the suburbs of Damascus. No words can describe the horror of the scenes we witnessed on our television screens. This shocking attack revealed the regime’s utter disregard for its own citizens’ lives, for decency, morality, and the rule of law. And it catalysed new and stronger responses from political leaders around the world which led to UN Security Council Resolution 2118 and the decision of the Organisation for the Prohibition of Chemical Weapons on the destruction of Syrian chemical weapons. It is now important for all the states which supported these resolutions, including all five permanent members of the Security Council, to follow through –

- To ensure that Syria’s chemical weapons are destroyed;
- To deliver through the Geneva II process a political solution which brings the war to an end, and;
- To continue to address the humanitarian needs of the civilian victims of this dreadful war.

Despite our shock and disgust at the use of chemical weapons, we should not forget that conventional weapons have killed 100 times more people in Syria than chemical weapons.  There is no easy political solution but the international community has to bring this war to an end. The bloodshed has gone on for too long. And the longer we wait, the greater the risk of the  entire region being dragged into a spiral of worsening instability. This is a risk that no nation in this room can afford to take.

Lessons learned from recent conflicts and crises teach us that sustainable peace and stability can only be achieved through long-term, comprehensive and regional solutions.

Afghanistan is a case in point.

Over the past 12 years, almost all the nations represented here in this room have made the difficult decision to send young men and women to Afghanistan to help the Afghan people to lay the foundations for a new democratic, stable and economically sustainable Afghanistan.

We reached a major milestone in our engagement there this year. Since June, the Afghan National Security Forces have been in the lead for security across the entire territory of Afghanistan. In just over a year, our combat role will officially end. Our nations, however, remain committed to continue to support Afghanistan politically, economically, and through training, advice and assistance to the Afghan National Security Forces.  We must make sure our citizens understand that without sustained, long-term support, we would jeopardize the hard-earned gains of the past decade.

2014 in particular will be a critical year. In April, Afghans will vote to elect a new President. This election will mark the first democratic change of leadership in the country since 2001. The new President will face the daunting simultaneous challenges of completing the security transition, affirming his role as commander in chief of the ANSF, and advancing reconciliation with the insurgency, at a time when our combat mission, and the economic benefits connected with a large international presence in the country, will come to an end. We must support this triple political, economic and security transition, so that it is as smooth as possible. This means delivering on our commitments to contribute the necessary troops to NATO’s post-2014 Resolute Support mission. It means also delivering on our pledges to support the ANSF financially post-2014. And it means assisting Afghanistan – and the broader region – to put in place the conditions for long-term economic sustainability and cooperation.

Of course, we know how hard it is, 12 years on, to convince our citizens of the ongoing importance of our commitment in Afghanistan. I face the same questions from my constituents as you do. And let me be frank: comments such as those we heard earlier this week from Kabul are not helping. Those who care about the future of Afghanistan must learn to set aside pre-election hot-headed rhetoric and focus instead on the long-term interests of the Afghan people. This is our shared challenge for 2014.

The recent Al Shabab attack in Nairobi shows us that we must continue to invest in the long-term stability of the Horn of Africa. Since 2008, and in response to a growing number of attacks which put at risk one of the main maritime trade routes, a large coalition of nations has maintained vessels off the Horn of Africa to deter and capture pirates. Naval deployments were complemented on the ground by military support from the African Union to the transitional Somali government, and a reinvigorated political agenda. Enhanced security on the seas and on the ground has allowed greater access for humanitarian assistance, and shipping companies have improved their self-protection measures. This multipronged action is now bearing fruit. Somali piracy has fallen to its lowest levels since 2006. New political institutions were put in place last year, and just a month ago, the donors’ conference held in Brussels endorsed a "New Deal for Somalia".  However, events in Nairobi are a cruel reminder that the situation remains very fragile.

The same is true also in Mali. Military intervention by French and African forces has created a favourable environment for a comprehensive and lasting solution. This summer, the country successfully held its first presidential election since the crisis, and thus returned to a legitimate, democratically elected, civilian leadership. Parliamentary elections are scheduled for the end of this month. A United Nations peacekeeping force, with a robust mandate and supported by a French-led force, is assisting the Malian army to consolidate control over its territory. Meanwhile, a European Union mission is assisting with the reform of the armed forces.

Nevertheless, the security situation remains fragile and requires sustained attention, as recent clashes in Northern Mali have highlighted. The re-established democratic institutions must also be consolidated, and the armed forces need in-depth reform. At the same time, it is essential to move ahead with dialogue and reconciliation, and also with truth and justice. We need to support the full deployment of the UN mission.

France acted promptly and decisively in Mali to prevent the threat of a terrorist take-over. Other Allies gave their support because we understood that we have a direct and immediate stake in the stability of the Sahel region. This remains true and so our support should continue, politically and through development assistance.

There is growing concern that the remnants of the terrorist groups which took control of Northern Mali in the spring of 2012 might be seeking a new haven in the largely ungoverned spaces of southern Libya to continue to spread instability in the region.

There, as in Somalia, as in Afghanistan, and as in Syria, we must remain vigilant. And remaining vigilant means continuing to invest in our defence. I accept that this is a difficult case to make to our constituents, but it is one we must continue making. NATO’s Smart Defence and the European Union’s Pooling and Sharing Initiative, will help to deliver better value for money from our defence budgets. But if we want to preserve our ability to respond to the broad range of potential crises and challenges in the future, these initiatives will not be enough. We must also commit to increase defence expenditure in real terms as economic growth returns. The latest data from the IMF published 2 days ago give grounds for cautious optimism, with growth predictions for 2014 of 2.6 % in the United States (up from 1.6% in 2013), 1.0% in the Eurozone (up from -0.4%) and 2.2% in Canada (up from 1.6%).

Without strong capabilities, our ambition to defend our interests and the values we stand for will be unfulfilled, and our response to crises will be narrow, limited and possibly ineffective. This is what history teaches us. And I hope we will have the will and resolve to learn this lesson and to apply it to the future.

Finally, we must do our utmost to preserve the vitality of the transatlantic link which lies at the heart of our Alliance. In Afghanistan, in Somalia, in Libya or in Mali, whether we decided to use the NATO framework or not, Europeans and North Americans worked side by side, in support of shared objectives.

When Europeans took the lead in Libya and in Mali, the United States and Canada provided critical capabilities to support the intervention. But it is important to remember that the reverse is also true. European members of the Alliance provide 65% of the troops in Kosovo, and 83% of non-US troops in ISAF in Afghanistan. Bilaterally or through the EU, Europe provides 2 billion USD in development assistance annually to Afghanistan, almost equal to the United States. Taken together all transatlantic contributions represent 72% of total of total development aid to Afghanistan.

My point is very simple: Europe and North America share objectives and values. We are stronger when we speak with one voice, and stronger when we act together. Yet, we must not to take this partnership for granted, and we should do more to remind our publics about the unique strength and enduring value of the transatlantic relationship.

I intend to make sure our Assembly plays a full part in this effort, and I count on your support.